LEADERSHIP STYLES AND TYPES OF INFLUENCE

Definition of Leadership: Influencing Others to Get THERE

Anyone can be a leader because all of us have the ability to influence one another. The way we steward our influence is the heart of leadership, whether we are in official roles or not. 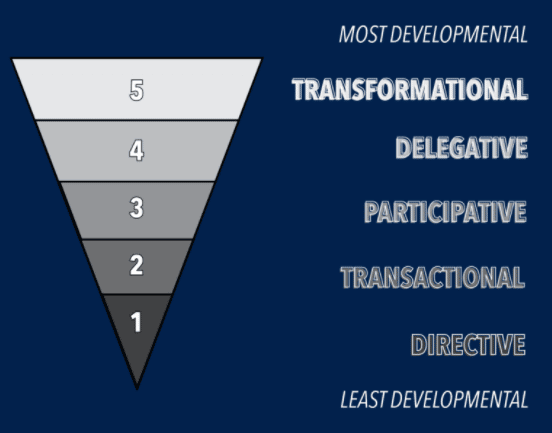 There are 5 Leadership Styles, which we use to lead & develop individuals within our organizations towards our Transcendent THERE:

Which style of leadership do you feel most comfortable in?

Which does your role (at home or work) require of you?

What is the goal of leadership?

In what areas do you see opportunities to grow in your own leadership journey?

The Crossroad of Leadership

We are all standing at an intersection, trying to be who we are and operate within a community. Effective leadership is about standing in this crossroads boldly and with intention. How does this view of leadership differ from popular narratives? How can we begin to turn our perspective to seeing life and leadership in a better, more effective, truer way?

This model explores the diverse ways people influence one another, from obligation to inspiration, impersonal to shared endeavor. It challenges us to begin by leading ourselves and then exploring the best way to lead others.

The Difference Between Influence and Control

Influence: Empowering, encouraging, and equipping others to take ownership of their character, commitment, and vision.

Control: Trying to force others to adhere to your vision, validate your personality, and take some weight from your load of ownership. 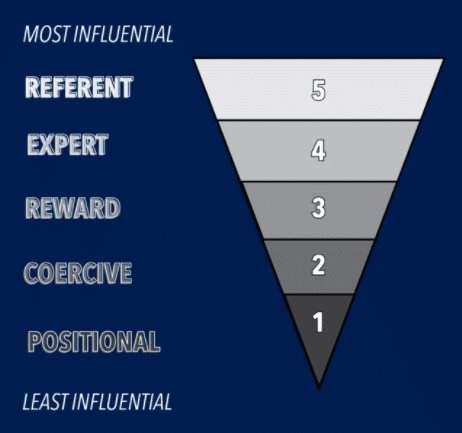 Healthy leaders realize they cannot control others, but have the opportunity to influence others. It is an invitation to partner together towards something bigger than themselves. This leads to a shared vision, co-ownership of the mission, and an effective culture of self-governance.

The 5 Types of Influence

1. POSITIONAL INFLUENCE: Based on a title, job or position. You can gain positional influence by being placed in positions of authority. The position carries a perceived weight to it that allows the person to influence the thoughts, actions, and perceptions of others. Most sought after but least effective way to influence others.
Examples: A police officer. A teacher. A parent. A coach.

2. COERCIVE INFLUENCE: Comes from the perception that someone has the ability to punish or enact negative consequences. You gain coercive influence through following through on disciplinary threats, reinforcing established boundaries. You lose coercive influence when you do not follow through.
Examples: Discipline from a parent. Anger from a spouse. Ridicule from a friend group. Demotion from a manager.

3. REWARD INFLUENCE Comes from the perception that someone has the ability to reward if you do, think, say what they are asking. You gain influence over others by following through on promises of reward. You lose reward influence by not following through on promised rewards.
Examples: Teammates applaud performance on the field. Teacher gives out snacks or prizes when the student answers correctly. Boss gives a raise to an employee for doing a good job. Parents extend curfew when the child stewards responsibility well.

4. EXPERT INFLUENCE: Comes from demonstrating a level of expertise in a specific area. You gain expert influence through demonstrating proficiency and you lose influence by pretending to know answers when you don’t or providing false/inadequate information on a topic.
Examples: Professor who has studied and published in their fields. An experienced skateboarder who knows more tricks than a novice. A married person giving relationship advice to a single (or newlywed) friend.

5. REFERENT INFLUENCE: This type of influence comes from doing life in a way others want to emulate. The stewardship of one’s own character. You gain referent influence through strengthening your Pillars. You lose referent influence through demonstrating poor character or choices.
Examples: A personal hero–mom, dad, a mentor, a coach. Historical figures renowned for service, courage, and character– Ghandi, Mother Teresa, or Abraham Lincoln.

What is an example of someone who has influence over you? Which of the five types of influence are they utilizing?

When is a time in your life where you have misjudged the difference between influence and control?

We are joined by David Kuhnert. Dave shares his experience in redefining effective leadership and how it has transformed all aspects of his life. Everyone can be a leader because leadership is about stewarding your influence. Dave talks about the different ways in which we can influence people, including modeling what it looks like to live with intention.

THE TENETS OF REFERENT POWER

A tool for cultivating Referent Influence. Gaining referent power is about both becoming the best person you can be and leading others most effectively. The tenets of referent power help us to be intentional about stewarding our lives by showing the key areas of life on which to focus our goals.

Referent Influence is achieved as you strengthen your pillars. People want to emulate others who they feel are stewarding these pillars well. “Strong” pillars means healthy and true, not superficial success. For example, a healthy emotional pillar is not someone who is never angry or sad (or pretends to be), but someone who stewards those emotions well. True vulnerability is stronger than false masking. 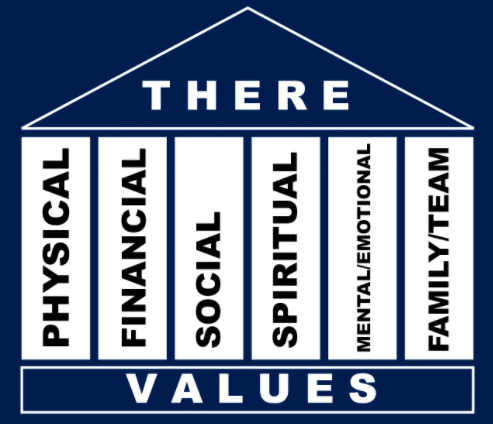 The 6 Tenets of Referent Power

1. Physical: How someone presents themselves, physical appearance and presence.

2. Financial: How an individual stewards their finances.

3. Social: A person’s ability to interact with others relationally.

4, Spiritual: A person’s relationship with God, trust and commitment to something bigger than themselves.

Which of the 6 Pillars of Referent Power are you strongest in? Why? Which is your weakest? Why?

Pick two of the pillars and set SMART goals to intentionally edify each of those pillars.

THE DISCIPLINE OF IMPROVEMENT (PILLARS OF GROWTH)

The Complexity of HERE ep. 4

In lesson three, we begin looking at the most difficult phase of THERE-HERE-PATH; naming our current reality. With the help of two great tools, [...]

ALL THE TOOLS
Page load link
Go to Top